Today, I present to you two beautiful, yet sad poems of lost love: the first of a person, the second of an animal companion. Both losses rend our hearts and these two poets express that heartbreak while celebrating the relationship that came before. Indeed, it is the beauty of the relationship that leads to such sorrow at the loss.

“The Pact” by Victoria Redel

“Stop All the Clocks” (sometimes called “Funeral Blues”) by W. H. Auden (This poem was used in the 1994 film Four Weddings and a Funeral.)

In our school’s Poetry Madness competition, these two poems go head-to-head today, and it’s a tough choice. Which would you choose to move on to the next round? Comment below. Let me know what you think.

I’ve written poems for the past three days of the Poem-A-Day challenge, but I haven’t been able to edit and type them up. (Yes, I hand write the first draft.) But this furry one keeps sitting in my lap so I can’t. 😻😹

They’ll be up soon.

No, the prompt is not to use only six poems, but rather to use at least three of these six words in the poem: convict, great, play, race, season, voice. I managed five.

The lounging cat is sleeping in my lap,

One arm sticks out in

His side rises and falls in

There is no play this evening,

No racing across the floor chasing

Yet, one eye periodically pulses open

Just a slit before he squeezes it closed again;

He’s keeping a sly watch on me.

He silently convicts me of

By returning to work

Three days ago, poet Taylor Mali posted on FB some new metaphors made up of words from some of his favorite metaphors by other poets and invited his followers to add a second line. I added a third as well:

“The soft cat feet of the heart”
Pad over the spot you left vacant
Trying to knead it back into shape.

His metaphor dice, now customizable, are great fun. They are a great way to kickstart your creative juices! Now we just need an online version for remote learning. Maybe a set of virtual spinning wheels?

This is my baby Leo. He was a prince among cats. I lost him almost two years ago in August 2016 after a battle with kidney disease and cancer. And I was finally able to paint him. Not only is it difficult to paint a pet you have lost and loved, but he was also a tuxedo cat, and let me tell you black cats are harder to paint than tabbies or calicoes or the like. The more colors, the easier it is to give the impression of depth and substance. But I had already painted Lionel, Leo’s successor, and it was time to give Leo his own painting of honor. Here is the result. I’m pretty pleased. Do not be afraid to tackle those projects so very close to your heart. Your heart will let you know when the time is right. Listen to it.

The other morning Lionel tried to convince me to stay home. “Meow, meow,” he said “rrrmmeow.” I should have listened to him.

Be warned: There is much grouchiness in this post.

The train was slow, so I missed my regular subway and took the next one. So far, not too bad–a couple of minutes behind schedule. But then, the third subway was crowded and late, and worst of all, I missed the announcement that it was going express. I ended up 11 blocks past my destination and had to walk back. So, instead of getting into work at 7:20, I arrived at 7:40–and I had a coverage first period. (For those of you not in the teaching profession, this means that I had to cover a class for a teacher absent today instead of having the prep period I expected.) No time for breakfast.

For the previous two days, my classroom had been boiling; the head had been pumping full force, so I dressed a little lighter: cotton top with 3/4 sleeves, long skirt, no tights. Naturally with Murphy’s law in full force, after first period there was an announcement: “There is no heat today. Students may wear non-uniform hoodies and jackets.” Great. Just Great. It was cold in there!

Luckily, though, it was a half a day with no faculty meeting following, and I had plans to meet a friend to see Da Vinci’s Salvatore Mundi at Christie’s. Yes, Leonardo Da Vinci. This painting had been in private and royal collections for the past two hundred years. It was being sold that night and will probably not be seen again for another two hundred years. This was a once in a lifetime opportunity. And, I missed it. When we got to the auction house at 1:30, they informed us that the viewing ended at noon. So much for my attempt at buoying my creativity with a 500 year old masterpiece.

Nevertheless, I still tried to muster some creativity. I went to a public atrium to write, but alas, there were no seats left. I trudged over to Barnes and Noble only to discover, after buying a tea that I really didn’t need but bought because I wanted to settle in at their cafe, that their wi-fi was not really working. I wanted to edit something on my Chromebook, so I needed the wi-fi to access it. UGH! I began to feel like I was wasting the day. It’s not often that I have an afternoon with neither classes, meetings, nor make-up tests and the like. And here I was traipsing from place to place, carrying a laptop, but getting nothing done. 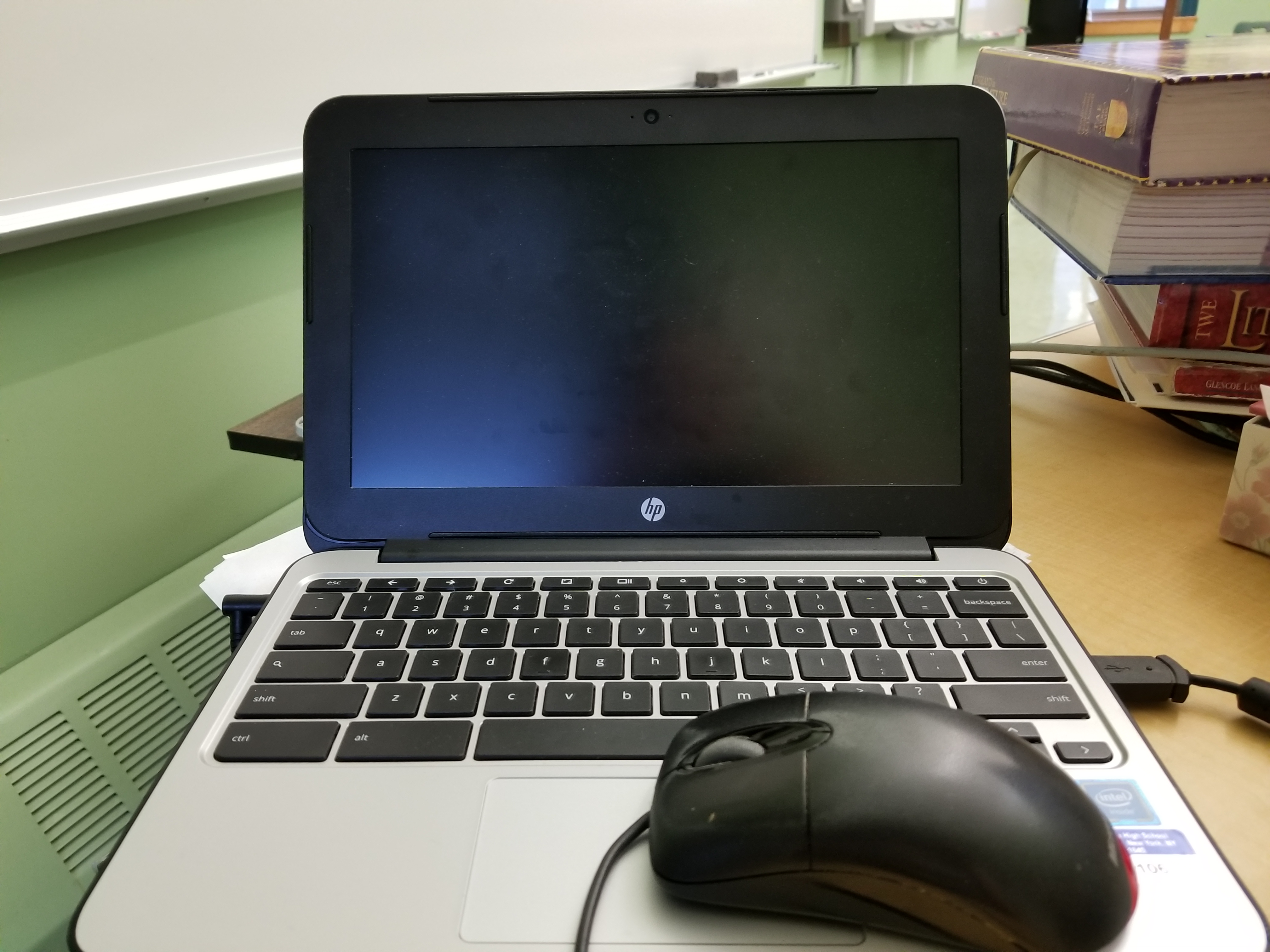 Annoyed and a bit aimless, I went back to the public atrium and, lo and behold, found a spot! PHEW! I popped open the Chromebook and started writing. FINALLY! And like that–WOOSH–the day was saved. So in this week of Thanksgiving, I want to publicly express my gratefulness for words-words on the screen, words on the page, words typed by my hands, words inked by my pen, words shared by others, words by the greats, and words by the small.  Let me remember to let writing, and reading, take me away from the grouchiness of the world when the best laid plans lead me to one obstacle and then another. Let me read my way to another reality, and write my way out of a funk. Thank you. Word.

Today I managed what I consider a great feat: I got my printer to work again! Ever since my computer updated, I have not been able to print anything. And for the most part, that has been okay. But I have been writing for much of the summer, working on a novel that I have attacked in fits and starts for years now. I really wanted to make some headway this summer and see if it still has life to it. And I have. You see, since I have worked on and off for years on this and in different places, the bits and pieces have been all over the place. I wrote much of the story longhand at first in a couple of different notebooks. I have take much of that and revised and typed this summer to get a good idea of what I have, putting different chapters or sections in different files. Getting the printer going has allowed me to print it all out and read through it together–as one would a novel. Now I can get an idea of what works, what doesn’t, and what’s missing as I figure out if the parts make a whole.

So I am very happy with myself.

Then, I start reading.

Immediately, I realize that the whole beginning needs editing. I mean, of course it does; I am not shocked, but still. The beginning? The first line? It can be a little disheartening. But I get to it. I make some changes. It’s good, but there’s a question I am not sure about regarding the positions of mortician and coroner. Hmmm…(Did I mention that much of the novel takes place in a funeral home?) I’d better do some more research. Luckily, I have a friend who just finished her mortuary science degree, and I have been able to call on her for some detail verification, but today, I went to the Internet where I found some fascinating reading on the history of coroners and mortuary science as well as the incredibly varied systems around the country regarding the business of death. But, I digress. Time to click that tab shut, close the laptop, and return to the printout.  Which I do. And I find a way out of the dilemma that sent me to those articles in the first place. Another win!

Then, my assistant shows up: 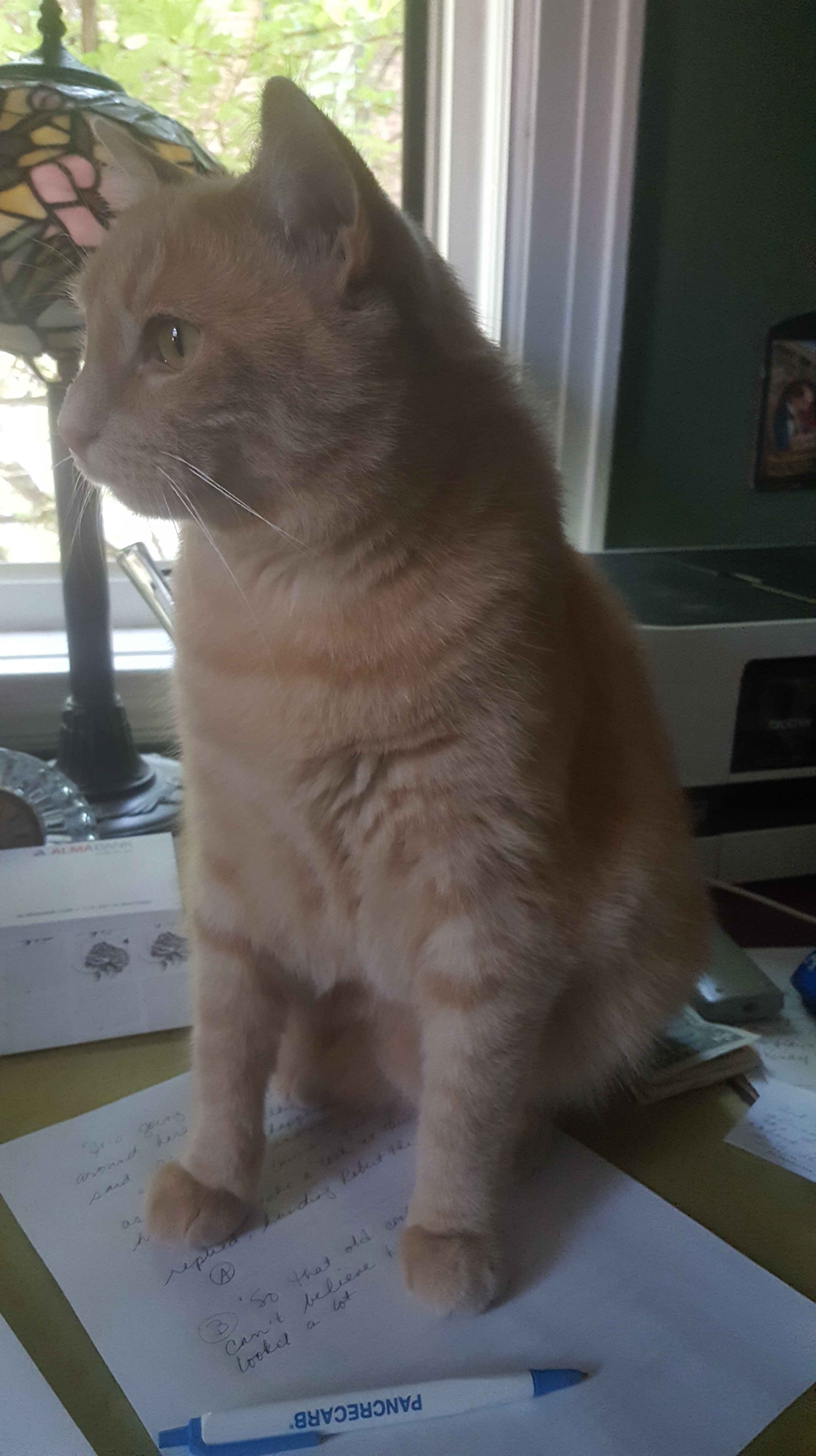 He has another opinion about writing.

His opinion is that writing keeps me from petting him, and therefore all implements thereof must be destroyed. Luckily, he has not been successful in his attempts, but I do think a petting and feeding break is in order!

Wish me luck as I continue on my quest, especially as it seems there is one file missing. I may have to go back to the notebooks yet again to continue the revision and typing before I can attack the ending–as of yet unwritten in any form, but floating around my head looking for an anchor.

It’s been almost two weeks since National Poetry Month ended during which I posted quite a bit, but I haven’t posted since.  But I have been writing,  painting, and crocheting.  Pretty soon,  I will post photos of my latest painting (finished today,  but no good photo yet and it’s still at the studio) and of the blanket I’m almost done crocheting (tonight or tomorrow,  I hope).  Several writing pieces  are also in the works.  Some are good; others need work. But I’m keeping at it. I hope you are too!

In the meantime,  here’s a picture of my Lionel Hardcastle doing what he does best,  being cute.

Today’s prompt is to write a sound poem. While walking through the park,  I was struck by the atmosphere after the storm and composed a poem that would obliquely qualify, but I’ve decided to write another that suits the prompt a little better.

The deep rumble of thunder

For staying home on rainy days

With a cozy blanket,  a cup of tea, and a good book

While his mini me purrs contentedly on my lap.

Everywhere you look, there is something to inspire you. Let the creative juices flow and appreciate the beauty of the world around us. And when that beauty is hard to see, create it! Here are just a few images from the past six months that make me smile. I hope they do the same for you. 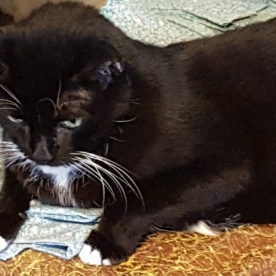 Leo, alway in my heart 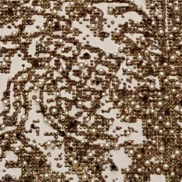 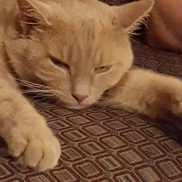 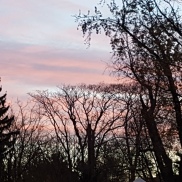 Beautiful table and Sargent in the background (Old Westbury Gardens)